Since May of 2021, I have been an intern a part of a restoration field team at UW-GB revolving around wetland conservation along the Green Bay’s west coast. This internship partakes in efforts set forth by the Green Bay Priority Wetland Invasive Species Management Project. This project is overseen by Ducks Unlimited and is funded through the National Fish and Wildlife Federation via the Sustain Our Great Lakes program, which aims to enhance the water quality and habitat of fish and wildlife throughout the Great Lakes basin. D.U. has partnered with the WI DNR, US FWS, and UW-GB, to control invasive species and restore native vegetation within the priority coastal wetlands of the Green Bay.

Through this experience, I took part in restoring native wild rice within designated sites spanning from Green Bay up to Marinette. Our restoration efforts consisted of environmental and aquatic plant surveys during the summer, followed by hand seeding during the fall. Along with restoring the native species, the wild rice project includes an educational and cultural outreach component that I have taken part in. These experiences included hosting field trips and teacher workshops, while shining light on the cultural importance that wild rice has to many indigenous tribes in Wisconsin.

In order to allow for the native vegetation to be able to re-establish, my roles also focused on invasive species management, mainly Phragmites australis. I collected and documented the locations of Phragmites within the wild rice restoration sites via georeferenced map. I then used this information to plan for herbicide treatment of widespread stands of the invasive. An Aquatic Plant Management permit application was submitted, in collaboration with other organizations such as the WI DNR and Brown County Parks Department, for a contractor to be hired by Ducks Unlimited. I also took part in planning non-herbicide treatment efforts, such as community invasive species cutting and removal events, underwater cuttings of small-scale stands of Phragmites, and compiling lists of invasive species at other sites.

Our team was also a part of the initial discovery and emergency response efforts related to the invasive European frog-bit, a small, floating aquatic plant that has only recently invaded waters of Wisconsin. Response efforts were lead by Michigan DNR, as the invasive has widespread prevalence in their state.

Following the field season, I will create brief management plans for the site managers of each of the wild rice sites, providing them with any notable findings on both native and invasive plant species. The plans will recommend any treatments that should be implemented or continued and will note the success of the wild rice at each seeding location. This will allow for the wild rice and invasive species management projects to be tied together and for knowledge gained through my internship to be relayed to the supervisors of each site.

Other notable side activities that my internship allowed for included assisting the DNR with goose banding, participating in monitoring of the endangered piping plover through their nesting season, and collecting trail camera footage to analyze what wildlife species were impacting the wetlands and the success of the wild rice. 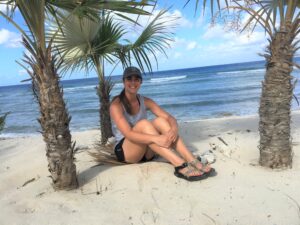 I am a second year Environmental Science & Policy graduate student at the University of Wisconsin Green Bay. During my time here, I will be obtaining a M.S. in ES&P, with an emphasis in Ecosystem Studies. I am currently partaking in a year long internship through the school assisting with wetland restoration efforts along the Green Bay’s west coast.

I graduated with high honors from the University of Wisconsin La Crosse in 2020, where I received my B.S. in Biology. While earning my degree, I was an upper level Human Anatomy & Physiology Teaching Assistant for three semesters and had the incredible opportunity to study Ecosystem Chemistry abroad in the Cayman Islands. Apart from academics, I was a four year student-athlete on the UWL softball team and was chosen as both team captain and Student Athlete Advisory Committee representative for two years.

Following undergrad, I took part in an Environmental Conservation & Land Management internship with the Lac Lawrann Conservancy located in West Bend, WI. Throughout all of these experiences, my passion for immersing myself in and preserving the natural world around me has only grown. As someone who has loved the outdoors from an early age, I am so excited to be taking part in this program and furthering my education at UW-GB!